Less than 7,000 Miles On Engine Rebuild

By the time the GTS was launched, the 928 was ending its 17-year production run.  As a result, the GTS cars benefited from all the previous development.  These 928s were truly the best of the best.  Unfortunately, only a mere 407 examples made it to the U.S. from 1993 to 1995.  Of those, approximately 120 were manual transmissions.  These 928s were made of aluminum including the engine.  This 5.4L motor put out 345hp and 369lb ft of torque.  The GTS models were well equipped and expensive.

This 928 GTS was custom ordered and built on January 28th, 1993.  It was sold new by Jim Ellis Porsche + Audi of Chamblee, Georgia on March 18th, 1993 to Mr. George Gourlay.  He was a long-time executive for Coca Cola in Atlanta, GA.  He custom ordered this GTS for his wife, Catherine Gourlay, as a surprise Anniversary gift.   Although well-equipped as standard, the following factory options were ordered in addition:

Due to the special color combination, the order was delayed over a month.  Then, the dealer installed the executive package, which included a mobile phone, Lojack, and K40 integrated radar detector.  The mobile phone has been removed, but the K40 still works.

These first owners truly pampered this 928.  No service was ever missed and it was always garaged.  All of their services were performed by their local Porsche dealership.  10-years later, they retired to Arizona and brought the car with them.  They sold the car on December 9th, 2003 with 32,854 miles to a local Orange County enthusiast who is well respected in the 928 community.  For the next decade and 20k miles, this owner did everything to bring this GTS to the next level.  Describing him as fanatical is putting it lightly.  If anything made a strange sound or he didn’t think it was right, he would spend countless dollars correcting it.  Most of the work was performed by Greg Brown of Precision Motorwerks in Anaheim, CA (one of the top Porsche 928 specialists in the country).  Highlights of significant repairs and enhancements include:

On October 6th, 2014, we sold this GTS with 56,140 miles to another enthusiast from Connecticut.   Before delivery to the next owner, this GTS was fully inspected by Greg Brown and he said the car was near perfect and really didn’t need anything, except possibly motor mounts that were still original and showing a slight amount of wear.  The seller had Brown install all new factory Porsche motor mounts and perform an oil service.  The bill was over $2,000.

All in all, the owner invested over $35,000 maintaining and improving this rare GTS.  Brown used this car to develop a custom exhaust system that produced an additional 23hp and 12lb ft torque.  See pictures for dyno results as well as this video of the run:

Recently, this GTS was selected by Porsche to be included in their Panamera launch commercial/media called “Family Tree.”  We have countless pictures from the event. Here is the TV commercial and behind the scenes:

Also, Porsche used this GTS as part of its interactive Family-Tree website experience as the representative for the 928 and it was selected as the official car of the 2009 Porsche Family Gathering event.

Shortly after we sold this GTS in 2014, it was invited to participate at the prestigious 2015 Concours on the Avenue in Carmel, California during Pebble Beach car week.  The car remained in California and was prepared to compete.  This was the first concours event it had ever been in.  It scored an impressive 98 points and just missed first place by half of a point.  After the event, the car was shipped back to the new owner’s home.  He kept the car for a total of three years before sending the 928 back to us in the summer of 2017.  He only drove it 1,400 miles during his care.  In preparation for sale, we took the car to our local specialist for a fresh oil change and cooling system flush.  The mechanic commented that it was one of the cleanest 928s he had seen.

We sold it on July 11th, 2017 with 57,564 miles to the current owner who is a long-time collector friend of ours who lives here in Southern California.  For the last 4 years/2k miles, this owner has enjoyed the car on weekend drives.  He has a mechanic that helps manage and care for his cars. Unfortunately, he is moving out of state and wants to reduce the collection.  Recent services performed by his onsite specialist include:

This is an excellent survivor example.  It looks fantastic and has obviously been properly care for.  There are minimal signs of use.  The special ordered Zermatt silver paint looks more like the original Porsche silver of the 70’s.  It has that very fine metallic look to it.  The only paintwork performed during ownership care was parts of the front bumper and cowl by the windshield.  That was repainted by Shane East over 10-years ago.  Apparently, either shortly after leaving the factory or maybe at the dealer before delivery, the hood and front fenders were repainted as well as the passenger door and sunroof panel.  This was not uncommon back in the day as cars got scratched or dinged in transport and most manufactures had paint booths and other repair facilities at the port.  The glass is all original, including the windshield and all the proper factory stampings are visible.  The windshield has a circular scratch that was professionally repaired many years ago.  All the exterior lights and lenses are free from cracks and operate properly.  The factory Cup 1 wheels (only delivered on 1993 model year cars for the U.S.), are in excellent condition with no significant flaws.  New Dunlop tires are being installed this week.

The underside is just as clean as the top.  It’s very dry with no signs of prior damage or rust.  Everything looks tidy and in order.  The engine bay is also clean with no signs of any significant issues or needed repairs.

The interiors on these cars are the best indicators for quality of care over their life.  This example looks very fresh and indicative of a low-mile, garaged example.  The supple leather seats show hardly any wear as well as being free of tears or rips.  Of course, the rear seats look unused.  The carpet has no significant signs or heavy wear marks.  The headliner and sun visors look great.  The door panels have no warping or cracking.  The dash and gauge binnacle look perfect with no cracks or warping.  The gauges all work as does the clock.  The power windows, mirrors, and sunroof all work.  The factory radio powers up, but the LCD display doesn’t work and no sound comes out.  The A/C system (both front and rear units) blow extremely cold.  All the interior lights work.

As a huge fan of the 928s, I’ve been fortunate to drive many of them over the years.  This is one of the best driving examples I’ve experienced.  It starts easily and holds a smooth idle.  The power delivery is quite strong and it effortlessly climbs the rev range with no hesitation.  The brakes have incredible bite with excellent pedal modulation.  It’s very easy to match revs with the pedal position.  The shifting is smooth with no grinding or slipping.  Handling is crisp and confidence inspiring.  It’s extremely comfortable on open highway cruising while also very composed on twisting back roads.

California registration is current and paid through July of 2021. 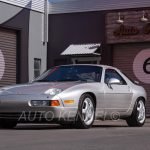 I ignored a voicemail from Asylum, Radical Media and Cramer-Krasselt.

It was a particularly busy weekday in 2009 with countless messages piling up when I heard this strange voicemail mentioning the three companies above. I thought it was some law firm calling me, which can’t be good. They obviously weren’t calling about a car to buy or sell, so I just hit “save.” Or at least I thought that’s what I did.

Days or maybe weeks go by and I completely forgot about that message. That’s because I accidently deleted it…duh! Then I hear from friends that Jeff Zwart of Radical Media was directing the next Porsche commercial for the launch of the all new Panamera. That voice mail was an invitation to the Porsche Promise Land: participation in one of the biggest gathering of rare vintage Porsches for a sixty second commercial.

The whispers at cars and coffee over the next several months about this storied gathering was like salt on an open wound. Then, behind the scenes photos began circulating and eventually the commercial itself. I thought I was going to be sick. I didn’t know what it was called at the time, but I’m pretty sure I had a severe case of FOMO (fear of missing out).

In 2014, we sold this 928 for the first time and I relived that regretful experience all over because this rare and special 928 GTS was a part of that special day. It wasn’t just a background prop either, but rather it had a prominent roll due to its design parallels to the Panamera.

In 2017, we got it back to sell again. Now, this is the third time. With each revisit, the self-reproach rises to the surface. There’s only one cure. I’ll just have to drive it until I feel better.

If you have any questions, please do not hesitate to contact Paul at 714-335-4911 or paul@autokennel.com

This vehicle is sold “as-is” with no warranty, written or implied.  In some cases, the vehicle does have the remaining factory warranty still in place and will be described above if that is the case.  All taxes and fees are the responsibility of the buyer and are not included in the listed price.  All vehicle sales will require a $170 document and admin fee.  The vehicle listed is described to the best of our ability.  The information is based on our own research and statements made to us by the previous owner(s).  To the best of our knowledge, the above information is accurate.  We are not responsible for errors in our description of options or any other details.  The above-mentioned vehicle is used and can be expected to show some wear and tear.  It is not a brand-new vehicle.  We do welcome all local pre-purchase inspections on vehicles in order to verify condition.  For payment, we accept bank transfer, cashier’s check, or cash.  Check’s take up to 10-business days to clear.  Vehicle and title will be held until all funds are cleared and verified.  Bank transfers usually only take 24 hours.

We appreciate the countless calls from brokers and dealers. As much as we would love to quickly “wholesale” this car to industry partners so they can make a quick profit, the car is on consignment (as are all of our offerings) and the owners have the final say.

If you have actually taken the time to read this far in our detailed description, I can’t imagine there are any questions you may have. However, if there is something I missed or you would prefer to hear the warm sound of a human voice (mine) reiterating the research I’ve provided above, I would be happy to help.

If you put our company name in Google (Autokennel) you will see that we have been a long time part of the Porsche community and have worked extremely hard to earn the positive reputation you will find. Feel free to reach out to our local PCA chapter (www.pcaocr.org) and the board members are familiar with us. Most in the club have known us for most of our 25-year membership involvement. Of course, if you would like more references, you will find countless testimonials on our website as well.